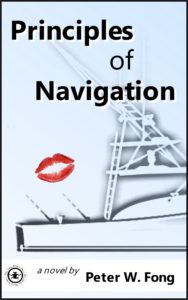 Peter W. Fong works as a freelance editor in Morocco and a flyfishing guide in Mongolia. His stories and photographs have appeared in American Fiction, Gray’s Sporting Journal, The New York Times Sophisticated Traveler, and many other publications. Over the past fifteen years, he and his family have lived in Pray, Montana; Woodstock, Vermont; Tokyo, Japan; Shanghai, China; and the Caribbean island of Aruba.

Peter earned an A.B. from Harvard College and an M.F.A. from the University of Montana. He won the 25th Anniversary Fiction Prize from Soundings East magazine and took second place in the 2005 Raymond Carver Short Story Contest. He is also the recipient of an individual artist’s fellowship from the Montana Arts Council and a former Moran artist-in-residence at Yellowstone National Park.

Charter captain Rigger Tavernier never imagined he could lose his bearings in the Florida Keys, until Jenna came along. A football star’s bride from a rich family, she seemed to be out of his league. But after that first night with Jenna, Rigger would give everything and more to keep her. First, however, he’ll have to sift through the wreck of his first marriage and the death of an old friend.

For Jenna McDowell, life was supposed to run like clockwork: marry the hunk, settle down, and make babies. She never thought she’d pursue someone like Rigger. But when your husband is shooting blanks, sometimes you take desperate measures. Jenna grew up around the horse track, so she knows a thing or two about stud service. But when the horseplay is over, who should be the child’s father?

In the end, both Rigger and Jenna find their bearings, but not until they learn that the Principles of Navigation are nothing more than the rules of the road—and rules are made to be broken.