The tides of change are coming to New Rivers, since our long-time Senior Editor Dr. Alan Davis will be retiring this spring. Recently, I spoke with soon-to-be senior editor for New Rivers Press, Professor Kevin Carollo, who teaches creative writing and poetry at MSUM and who has helped oversee the poetry judging for New Rivers Press for several years. Joining him on the staff will be web librarian and MSUM alumnus Travis Dolence as the new director.

In his first year as editor, Carollo plans to “stay the course” in terms of publication, largely because many publishing decisions for the next few years have already been made. After that, Carollo is excited to implement some changes, starting with very active engagement with the rest of the staff, including Managing Editor Nathan ‘Nayt’ Rundquist.

“I plan to help Nayt as much as possible,” Carollo said. “I want to be more than a figure who signs on the dotted line and submits final edits.”

In fact, Carollo has plenty of ideas he wants to try out in the future, both large and small. Some of these changes include publishing a chapbook series and more international translations, building a local literary annex for MSUM students and staff, and reconsidering the press’ financial situation, including looking at the effectiveness of the American Fiction project.

Carollo seemed particularly passionate about instating a series of chapbooks, which allow for more creativity and freedom of design than traditional books. He even commented that in addition to full-length translation efforts, there could be a chapbook contest similar to the Many Voices Project and an additional international, translated chapbook series. Carollo pointed out that some presses use international publications as their main focus, and many have become very successful doing so. 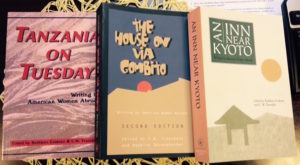 Part of the reason to add a new focus to the press’ publication lineup is to strengthen New Rivers Press’ legacy and importance here on campus. The idea, Carollo said, is that “[w]e want to make ourselves invaluable to the press [and university].” New Rivers Press’ previous international series was fairly popular and sold well compared to other titles, so Carollo in part hopes to draw in more readers and customers that way. After all, a few successful books “could be a game-changer” in press funding, Carollo said. He also mentioned the danger of being a small independent press at a college campus.

“There’s a possibility an administrator could come in and say, ‘Why do we need New Rivers Press?’ And I want to make that impossible,” Carollo said. That also plays into the creation of an annex, which would guarantee a physical legacy for the press.

In cooperation with another creative writing professor at MSUM, Professor Thom Tammaro, Carollo wants to collect the writings and works stored in Carollo’s office and Tammaro’s office, including works by previous New Rivers authors, the writing and notes of the late Tom McGrath, and others. This annex could either be a traveling cart that is wheeled to various classes and apprenticeships, or it could be a permanent fixture near the New Rivers offices or in the library so that any students could visit, peruse, and enjoy the collection of notes, journals, and final works.

Additionally, since presses big and small are tightening their belts, Carollo and the new director, Travis Dolence, will be looking into New Rivers Press’ finances to see what the press can and should be able to afford in the coming years. I will be speaking with Director Dolence later on in the spring about what decisions have been made about the press’ financial health, as he will be the one primarily organizing budgets and creating a sense of feasibility for Carollo’s suggestions.

Finally, Carollo stressed that although it is a time of transition, this is also a time for excitement about something new. Carollo’s enthusiasm for his new role shone through in our interview. He spoke about his mission as an editor to bring his personality and aesthetics to the projects, as well as seek new areas of interest.

“If I’m going to be an editor, I need a strong vision and a taste for great literature,” Carollo said, adding that it “falls to New Rivers to celebrate the book” both locally and beyond. He hopes to tap his vast knowledge of poets to find the best writers for the press.

“What’s really fun is finding something I dig and see[ing] if it’s something the press can get behind,” Carollo said. “I’m committed to see what we can do.”