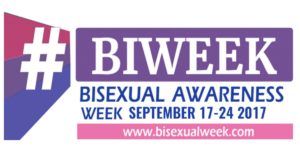 Everyone knows about Pride in the summer—you can’t turn on the news or walk into a gay bar without being reminded there’s a giant party going on. But, as the pumpkin spice lattes return to shelves and we eat Halloween candy by the fistful, a quieter celebration is taking place. September 17 – 24 is #BiWeek 2017, and it is no less important to celebrate than Pride or National Coming Out Week or other queer holidays. In fact, since the bisexual community faces opposition from parts of queer community as well as from the straight majority, it can be even more difficult to find accurate, interesting portrayals of bisexual people in media.

So get ready for some bisexual pride! After scouring the blogosphere, reader reviews, and publishers’ pages, I’ve found some books to help everyone celebrate, and for allies like myself, maybe even learn something. The following are placed in categories, so hopefully there’s a little something for everyone. All the resources used for this article are linked at the bottom.

This is a collection of essays for bi people by bi people. Simple as that. And it isn’t just relevant for British folks either. The chapters address intersectionalities—bisexual and disabled, bisexual black and minority ethnic people, bisexuals and faith—as well as common myths, monogamy and dating, workplace encounters, allies, and activism, among others. It won The Bookbag’s Non-fiction Book of the Month award when it came out in September 2016.

A Cup of Water Under My Bed, Daisy Hernandez, Beacon Press

Hernandez separates her book into three sections—family, sexuality, and work/class. She writes of the weavings between her biracial Colombian/Cuban heritage and her bisexuality fluidly, and her poetic inspirations shape the feel of the book. It is a dynamic look at intersectionality and the challenges of moving away from one’s family.

Tweedy’s collection moves through the facets of motherhood, from the speaker’s grandmother-mother relationship to her own mother-daughter relationship and that of her relationship with her new baby. Later on sexuality and nature are addressed more directly. This is Tweedy’s first full book of poetry, but she has had other work published in queer magazines and journals.

This queer classic from 1982 tackles numerous issues of race, gender, class, and sexuality. A Pulitzer Prize winner and National Book Award winner, Walker’s novel is told in Celie’s letters as she fights her way through an abusive childhood and into an ever-changing adulthood. If you haven’t read it yet, this is a great time to start.

Queer, There and Everywhere: 23 People Who Changed the World, Sarah Prager, HarperCollins

This middle-grade to YA-friendly history book discusses the famous and the revolutionary people who were queer in some fashion or rumored to be. While some readers found the people mentioned to be limited in its global view (almost all the figures are from North America or Europe), it still makes for a positive jumping-off point in documenting queer history. Also, the fact that the book is geared towards younger readers will hopefully mean a greater curiosity around queer history in future generations.

This YA drama centers on Grace Glasser, a 17-year old biracial and bisexual teen. The main conflict is between Grace and her mother, Maggie, who moves between locations and boyfriends without concern for her daughter’s welfare or how the bills will get paid. While the book may not be perfect—it seems no YA book is—the author is actually bi, which lends the book more credit, and Grace is able to have a romantic relationship with a girl and a platonic friendship with a boy without things becoming a clichéd love triangle.

This internationally best-selling thriller needs almost no introduction. And of course, the ass-kicking hacker Lisbeth Salander hardly needs one either. Salander may have an incredibly traumatic past, but her sexuality is clear and just part of Salander’s dynamic character. If you’re in the mood for a bad-guys-getting-their-due kind of book, this is for you.

While Turf Wars is pretty far along in the Legend of Korra storyline, this newest title finally explores the relationship confirmed by both the creators and hinted at in the animated television series. Korra’s character and identity are not defined solely by her sexuality; and, despite the hardships she and her friends face in the conflicts between different Benders, it’s a pretty uplifting series. This is definitely a welcome change from other depictions of LGBTQIA folks, and it is well worth checking out.

This breakthrough series was embraced by comic book fans for explicitly confirming the sexualities of several superhero/villain favorites, in addition to just being cool. It has one of the first characters to ever say “I’m bisexual,” and it also includes many other identities and orientations on the LGBTQIA spectrum.

Q&A and excerpt from A Cup of Water Under My Bed: https://www.bitchmedia.org/post/para-las-hijas-an-interview-with-author-daisy-hernandez

A blog dedicated to bisexual books of all categories: http://www.bisexualbooks.com

Reviews of The Body’s Alphabet: http://www.literarymama.com/reviews/archives/2016/12/a-review-of-the-bodys-alphabet.html