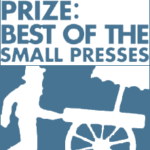 That time of year has come again for New Rivers Press to nominate several short works featured in this year’s publications for the Pushcart Prize.

We wish these works and their writers the best of luck!

The Pushcart Prize is a literary award specifically open to small presses around the country that honors the best “poetry, short fiction, essays, and literary whatnot” (as their website terms it) published each year. Anthologies of the winning pieces are published each year by Pushcart Press and 2016 marks the prize’s 40th anniversary.