The 2015-2016 school year has been a busy one, filled with many positive changes. As Finals loom over us in the week to come and summer is just around the corner, we at New Rivers Press are taking a moment to look back on all the things that we were able to accomplish this past year.

Flashcards and the Curse of Ambrosia by Tracy Robert (2 Novellas)

Among these Home Studies was declared a finalist for the Minnesota Book Awards. The short stories, “Love, Faith” by Cathy Cruise and “A Re-Education” by Jennifer Nguyen as printed in American Fiction: Volume 14; as well as “The Core” a chapter in Flashcards and the Curse of Ambrosia by Tracy Robert, “Dark Time” short story by Daniel Gabriel as printed in Wrestling with Angels, and Julie Gard’s “Make Your Own Fun” a poem from Home Studies, have each been nominated for a Pushcart Prize. The winners will be announced later this year.

We had four brilliant students intern with us this school year. They were Anna Landsverk: in charge of the newsletter, Laura Grimm: master of social media, Desi Miller: graphic design extraordinaire and Mikaila Norman: website guru. Desi has decided to move on from her internship with us, and we are very grateful for all of her hard work this past year. Laura, Anna and Mikaila will return in the fall, and Mikaila will be interning over the summer as well. Beginning in the summer, we will also have a new intern, Kristin Leither, who will be helping create a badly needed digital database of NRP’s books for office use.

Nayt Rundquist is only two months short of his first anniversary as New Rivers Press’s Managing Editor. The fact that he is still alive must indicate that he is doing something right. We at the office extend our deepest gratitude and congratulations for all his successes this year.

New Rivers Press both attended and held many fun and interesting events this year. Here are some of the highlights:

Minnesota Center for Book Arts, On the Road

On September 12th and 13th NRP hosted a book-making workshop instructed by two representatives from the Minnesota Center for Book Arts. Participants in the workshop learned how to craft many creative custom books using different binding styles, including Asian stab-binding and long-stitch binding. 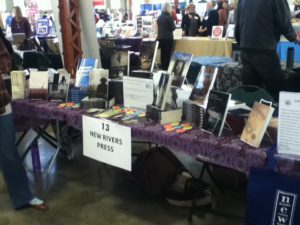 On October 17th Nayt and several interns journeyed down to St. Paul for the Rain Taxi Book Convention held on the Minnesota State Fairgrounds in the Fine Arts Building. Here they set up shop, alongside many other local presses and authors, intending to spread awareness of the press and sell books. Several of NRP’s authors attended for signings and readings of their works. The NRP staff and authors alike enjoyed being surrounded by others with a passion for the craft with local ties. It was a fun and productive experience.

NRP held many book launch events featuring author readings to celebrate the publication of American Fiction: Volume 14, Home Studies, Wrestling with Angels, Flashcards and the Curse of Ambrosia and Mother Tongue. These events were held between October 22nd and 24th at different venues around Fargo-Moorhead. 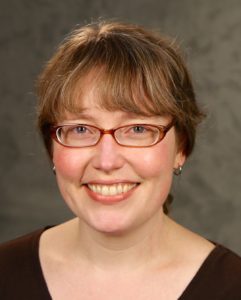 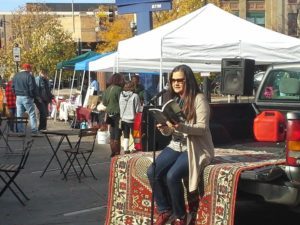 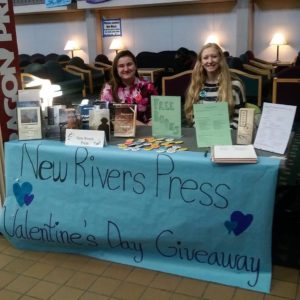 The interns organized this event in order to raise awareness of the Press on campus and to engage with students. They set up a table in the Comstock Memorial Union on February 12th to celebrate not only the upcoming Valentine’s holiday but International Book Giving Day, which also falls on February 14th. The event happened to coincide with a Dragon Day, a day in which prospective students tour the school. We were able to reach out to many currently enrolled MSUM students as well as many enthusiastic “Baby Dragons.” The interns gave away numerous NRP books from recent years past, played trivia games with table-visitors, held a book raffle and educated interested students about NRP’s publishing courses and Certificate in Publishing. The event was a smashing success. 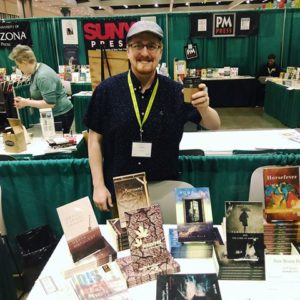 Nayt Featured in the Fargo Forum

On March 28th Nayt was featured in the Fargo Forum as a part of the “Its My Job” series. Writer Adam Watts interviewed Nayt on his new position as New Rivers Press’s managing editor. You can view the article here.

Nayt and his wife Lexie, as well as a few NRP authors made the perilous journey to the mysterious land of Los Angeles to attend the Association of Writers & Writing Programs (AWP)’s annual conference, which was held between March 20th and April 2nd. Something like another Rain Taxi but on a macro scale, AWP features presses and writers from all around the country. 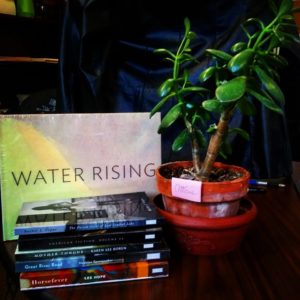 A New Friend in the Office

Intern Laura gave the Office’s resident Jade Plant the name “Atticus Vanderplant.” He has flourished nicely this year under the care of Lexie, Nayt’s wife, who visits several times a week.

As you can see, many fun times were had this past year. A word of thanks to everyone who has contributed to our successes: NRP staff, students, authors and readers. Here’s to a fantastic and productive year to come!